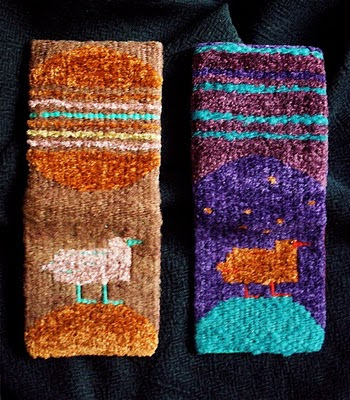 I hope you'll excuse my laziness but a couple of days ago when Gfid posted a couple of pictures of a loom I found myself writing a very long comment where I reminisced about a weaver:

One of my closest friends was a master weaver from Sweden when we first met in Montreal. She'd trained for seven years before coming to Canada with the equivalent of a doctorate to design and oversee the upholstery and other fabrics that were to be woven for the newly refurbished CNR trains. Once the project was over she stayed. She taught me to card, spin, dye and weave over the course of the 5 or 6 years we lived in close proximity. We both designed and made clothes but I was in charge of the sewing :-) She even had lace making pillows and some very old patterns so I got to try that too - a dozen pairs of bobbins to make lace just an inch wide was a pretty intense experience. One of my favorites of her stories was the year she spent planting a field of flax, harvesting, soaking, beating, spinning and weaving her former field into a damask tablecloth and napkins. You don't see a lot of that anymore.

She had two Canadian Leclerc looms for teaching on but the one she used was something like an antique Glimakra counterbalance loom that was huge - almost like a small cottage to look at and touch with an eight foot beam and 16 shafts and treadles. No metal anywhere either - it was all carved wood and had strings for heddles. Weaving on it was similar to learning how to play a full size pipe organ and reason enough to plan on staying in the same place for a long time.

She taught me how to look at hand made carpets from the middle east and to know by the subtle bends at the edges how many seasons it had taken to make by how often it had been cut down from a loom and restrung when the nomads moved from summer to winter lands and back. I learned about identifying carpets by the shades of the natural dyes they used and the design elements specific to certain tribes. It's amazing what you could learn from looking at a rug. We both despaired the loss of hand-made traditions long before most people were noticing.

I still have several of her pieces but the neatest ones are very small - two little bird bags she wove for me. Maybe it's time to take their pictures and do a post so I can show you.

So here are the two little bird bags as promised, opened to show the larger design. The fibers (wool, linen and chenille) were dyed using vegetable and flower essences. Inside each bag is a silk lining - pink for the pink bird and dark red for the other, both carefully hand stitched. The art schools taught me to draw but it was my friend who taught me to see and to take the same wild gambles with color that nature does. She is still around and is still my friend but lives in Philadelphia as a full-time Sufi practitioner and teacher. The weaver died un-mourned long ago.

Don't let your flying shuttles get out of hand.