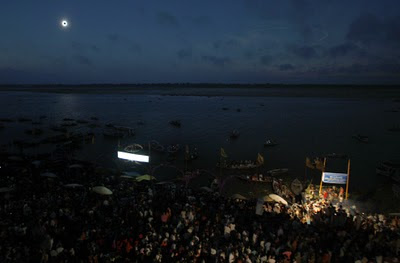 Have you ever wondered how amazing total eclipses are? Some weeks ago I ran across this photograph taken last summer during the total solar eclipse that was visible in southern India and parts of China and wondered, not for the first time, about the possible meanings of something we marvel at when it occurs locally but generally don't consider much at all. I remember hearing it said that if one found a watch one immediately knows it was made by a watchmaker and if one found a watch on Mars we would look for a watchmaker there.

It is very strange that the disc of the Moon should seem, from an Earthly perspective, to be exactly the same size as the Sun. Although we take it for granted that the two main bodies seen in Earth's skies look the same size, it is actually something of a miracle. Most people are fully aware that the Moon is tiny compared to the Sun but that it is much, much closer to us causing them to appear as equal discs. To be precise the Moon is 400 times smaller than the star at the center of our solar system, yet it is also just one 400th of the distance between the Earth and the Sun.

The odds against this optical illusion happening at all are simply huge - but how bizarre that both values are the same, perfectly round number. It's very puzzling. Isaac Asimov described this perfect visual alignment as being:

"The most unlikely coincidence imaginable".

This perfect fit of the lunar and solar discs is a very human perspective because it only works from the viewpoint of someone standing on the Earth's surface. I'm sure there are many wonderful sights in the galaxy but it seems to me that if there were aliens doing a Grand Tour of this particular spiral arm of the Milky Way stopping by the earth to watch a total solar eclipse and that magical diamond effect might be a high point. Perhaps we should watch out for 'people' wearing very bulky suits or viewers who stay inside large vehicles next time there's one occurring in the neighborhood.

An even more amazing thing that's true about the Moon's movements above our heads is that by some absolutely strange mechanism of nature, the Moon also manages to very precisely imitate the movements of the Sun. The full Moon is at its highest and brightest at midwinter, mirroring the Sun at midsummer and at lowest and weakest at midsummer when the Sun is at its highest and brightest.

I don't know about you but I'm beginning to think something weird is going on around here. I may have to go and look for a Watchmaker.. or maybe I'll go and do something useful like making chocolate brownies.
Posted by susan at 2:31 PM