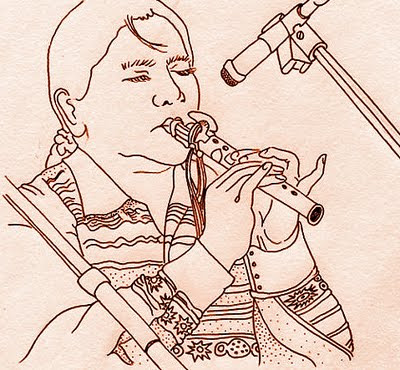 Every year around this time there's a Busker's Festival held at the Halifax harbor boardwalk. These days I prefer avoiding crowds whenever possible - at least crowds of holiday makers whose main interest seems to be lining up at food vending stands. Call me cranky and I won't argue.

Anyway, yesterday we had some business to attend to a few blocks over at a place that's on the direct route to the busy summer waterfront. As we walked across the bridge to the ferry terminal we heard a few young guys attempting to play a Crosby, Stills and Nash song. Strangely, we'd passed the disabled man whose usual summer spot that is driving his wheelchair along Barrington St. a few minutes previously. He busks in the city year round playing Acadian music on a battered old accordion but it appeared he hadn't been invited to the event.

A few minutes later as we made our way through the people thronging the first batch of food stalls we heard something amazing. It was Andean music and the musicians were very, very good. They were set up under a small awning just to one side of the main walk where there was little space for an audience to stand, and certainly no place to sit. We stood in the bright sun for close to half an hour while people walked directly past them, sometimes even kicking the guitar case placed for donations. The four musicians didn't seem to mind as they continued to play their magnificent haunting music. Besides how wonderful it sounded what was really amazing was to see them switch the traditional instruments during the course of playing individual pieces. It's very rare to see such virtuosos in performance and we felt very blessed to be there in person. Eventually they stopped for a short break and we walked on.

As we continued on our way we saw several other acts playing at much better stages. A couple of hip-hop artists were entertaining an audience sitting on bleachers and benches near their space. Further along a large number of people were enjoying a karaoke contest at another well set up performance area. The last act we saw before we left the harbor was a young guy at a prime site who was balancing a power lawn mower on his chin while a couple of audience members threw heads of lettuce at the rotating blades. Now I don't have anything against hip-hop, karaoke, or bizarre balancing acts but I thought it was rude to make the musicians from Ecuador play in the midst of what was essentially a sidewalk.

So in honor of their magical concert I have drawn a picture. I hope it's one that lets you almost hear the music they played.