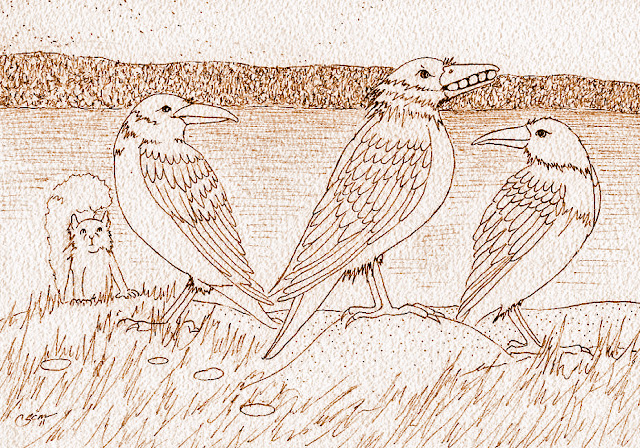 Some things you just have to show because if simply described there's no way you'd believe the sight. Ever since it began to get cold around here I've been carrying a little sack of peanuts with me whenever we take our walk in Point Pleasant Park. A mile or two along the wooded pathways we have a favorite spot where there's a bench near a rocky outcrop that overlooks the water and the south shore. Usually, well before we reach the spot, a local crow or two will have noted our presence and will start cawing to alert his friends to our arrival. I toss peanuts around the area and then we sit to watch what happens.

Generally, one crow will stay on a branch of a nearby tree while several others land to grab the nuts. For some reason there's always one among them, invariably the biggest one, who takes the first turn and picks up as many as he can find all at once. Often he'll have such a load in his beak that the last ones will fall out but he remains persistent and won't fly away with his hoard until he's sure he can hold no more. I can't tell you how hilarious it looks to see a crow looking like he has a mouthful of big yellowish teeth so I drew a picture. The other crows never seem to mind and just let him get on with his business.

Meanwhile, a little squirrel who lives nearby patiently waits his turn. Squirrels around here are the smallest I've ever seen and this one is always careful about not getting too close to the larger birds. I always save a few nuts for him just in case he misses out on the first feast. A few days ago he came all the way over to the bench where he stood up on his hind legs to ask for his share.