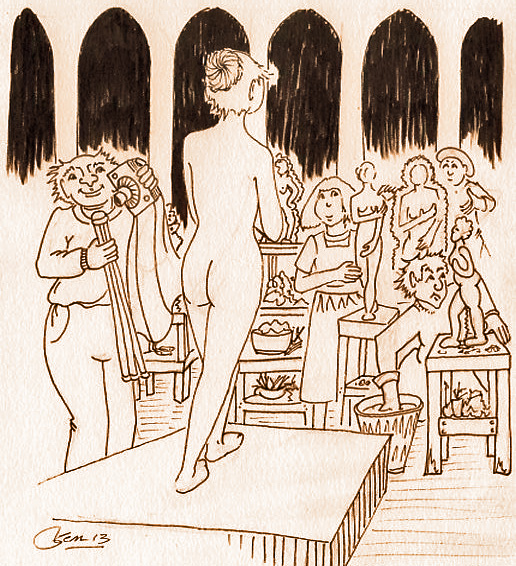 Okay I've been scribbling again but while I was doing so I remembered one of the sillier things that happened during my art modeling career long ago. You may recall I was in the process of saving money for a long trip to Europe - one my parents reluctantly agreed to but wouldn't fund.

At one point I was invited to model for an introductory sculpture class that would take place as three hour sessions twice weekly for six weeks. The fee sounded pretty good so I signed on. I didn't usually accept poses determined by instructors but in this case it was necessary that it be a standing pose with my arms held close in to my body. The students worked with modeling clay over wire armatures and during the course of those weeks gradually built sculptures that looked vaguely human and female but didn't bear more than a cursory resemblance to me. By then a major reason for continuing as an artist's model was my certainty nobody would ever recognize me as having been the model.

Eventually some of the students entered the final phase of the process that would allow them to cast their work into more permanent material. The first part was to divide their figures in half lengthwise by attaching a thin two inch wide collar of clay around the outer edge. After coating the figures with vaseline to allow for easy removal later they'd flick wet plaster in tiny droplets at the clay statue to make a mold. Meanwhile, I was still posing for the benefit of slower workers. I should tell you that by this point I'd be in pain even if I accidentally slipped into the pose when I wasn't in the class. Added to the agony of the long pose I was now subjected to being pelted by stray bits of plaster - not always by accident, I suspected.

There was a rule back then that no cameras were allowed in the studio while the model was posing. One evening a student arrived with a camera. Now this wasn't one of the smaller varieties of cameras people could buy in those non-tech times, but a giant studio rig. Grinning widely, he hauled in his tripod and lights and was in the process of setting up the whole lot directly facing me. What did I do? I grabbed my robe and left the stage while everybody else told him off.

I'm happy there were no cell phones in those days, or facebook.
♡
Posted by susan at 1:18 PM