back at ye olde drawing board 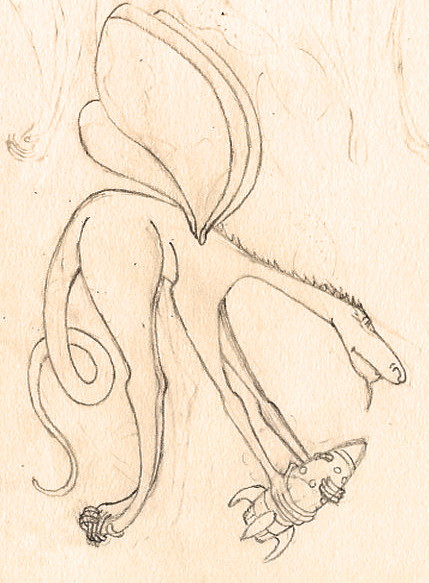 If I'm not doing one thing it seems I often find myself involved in doing half a dozen things at about the same time. It can get confusing but it's kind of fun too. This little guy who appeared this afternoon will likely be an element in a painting I have on the drawing board. It's good I have more than one drawing board because there's another illustration in progress that had to move to a shelf temporarily while I work on this one. My drawing table isn't all that big.

The painting on the shelf I'm afraid to show you. It's not that it isn't a good one in my opinion but that it's the first  picture in what will be a story that was only told once or twice a long time ago. It never had pictures. It may not even need pictures as most people, especially small people (known as children) have very active visual imaginations. Anyway, it's getting pictures, probably a dozen, but I'll keep them to myself for a while as I work the whole thing out in the real. Scans are being done so once I'm closer to finishing I'll show you the process as it happened. It may take a while.

Next, I have a couple of stories in mind for the long neglected Adventures Ink. The whole idea with them was they could be drawn fairly fast once I knew which one I wanted to relate. I've remembered a couple.

So that's what I'm up to. If you're not bored yet or don't have anything else to do for a couple of minutes you might like this little animation I found. It's a bit strange but I like strange and I like van Gogh and it's nice to see something a little bittersweet. So far as I can tell it was made by an Iranian team.