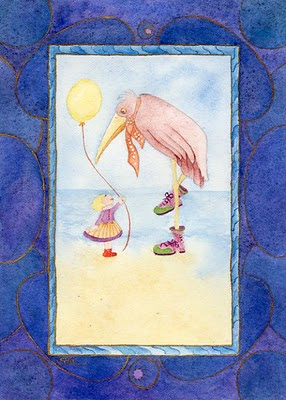 I mentioned I've been painting again and want to share Mr. Crane who appeared this weekend when I sat at my table for a few quiet hours.

Among my favorite Christmas stories is the one by O. Henry called 'The Gift of the Magi'. I've linked to the original for those few who aren't familiar with the story of the poor young couple on Christmas Eve each of whom gave up their only physical treasure in order to buy a present for the other. It's a sweet and wonderful tale whether you think the two of them were idiots or not. Grand gestures are sometimes what love is about but not always. Every gift, no matter how small, is a sacrifice of the heart for the hope and beauty of the future.

O. Henry goes on to say:

'The Magi, as you know, were wise men--wonderfully wise men--who brought gifts to the Babe in the manger. They invented the art of giving Christmas presents. Being wise, their gifts were no doubt wise ones, possibly bearing the privilege of exchange in case of duplication. And here I have lamely related to you the uneventful chronicle of two foolish children in a flat who most unwisely sacrificed for each other the greatest treasures of their house. But in a last word to the wise of these days let it be said that of all who give gifts these two were the wisest. O all who give and receive gifts, such as they are wisest. Everywhere they are wisest. They are the Magi.

Wishing you a very Happy Christmas.
Posted by susan at 6:02 PM