Crow here. I've been flying back and forth from Europe the last few weeks checking in with old friends and new ones who are looking at the current economic situation from a different point of view. Things aren't just going to change. They have changed but there's no reason we (and you) can't be part of making things better without even bothering about the banks and the government.

This was said an old friend of mine after the Spanish Civil war. He was a young priest called Arizmendi who was sent to the Basque country after Franco's defeat and what he found there was severe unemployment, a region badly damaged by the war and a populace in serious financial difficulties. He wasn't a particularly gifted speaker but he was determined to assist his parishioners in spite of the fact they didn't much like him. You can't let a little thing like that get in the way. He decided to focus on the economic development of the town, settling on co-operative methods to achieve his goals.

In this small town, whose name translates to Mondragon, he started a democratically managed polytechnic school and in 1956 several graduates began the first of the cooperative businesses that have become a model for a little known but world wide democratic cooperative revolution. Three years after the inception of the small manufacturing business they went on to set up the 'People's Worker Bank' which allowed the co-operative members access to financial services and subsequently provided start-up funds for new co-operative ventures. Since then it's worked out very well. The associated companies give preference to fellow co-operatives, workers manage their finances, hold health insurances and pension funds and have discounts at cooperative stores. When a cooperative has got in economical trouble, workers preferred to take pay cuts over layoffs and if the situation worsens, redundant workers are provided with positions in other group co-operatives.

In the United States right now there are more people involved in cooperative movements than there are union workers. You can read about it in a book called 'America Beyond Capitalism' by Gar Alperovitz - a political science professor at the University of Maryland. It's a few years old but, hey, there are always a few folks ahead of the curve and he saw something coming. There are 11,000 worker owned companies in the US and 120 million people involved in cooperatives of one kind or another. The best of them are one person one vote places but true democratization of the cooperatives is still at a minority level here. Still, it's something to look forward to as we all move toward the next thing.

Kim Stanley Robinson described the potential of a fully functioning Mondragonian Cooperative system in his science fiction epic series of Mars books (Red, Green and Blue) where people owned their personal possessions but not property. That was held in common. It may sound uncomfortable but think for a minute of the freedom you could have if you didn't have to make mortgage payments or pay property taxes on one single place. What if you could go to live anywhere and be guaranteed a job once you arrived? It might be similar to the way my friends and I live. As it is now your society holds slavery as anathema but what is practiced is oppression of a subtler kind - it's called serfdom.

There are other alternatives to Capitalism than Communism and Cooperatism might just be the best way to a better future for all of us since it's based on fair use and sustainability rather than greed and destruction. My brothers and sisters with four legs or wings are definitely in favor of anything like that. 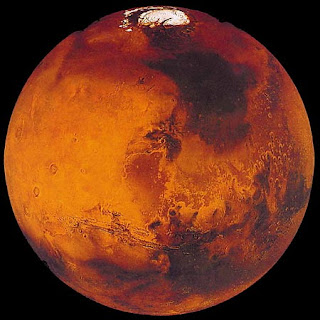 I see susan has my fruitcake on a little plate and a snifter of nicely warmed Remy Martin so I'd best make myself comfortable on my perch and look out the window at Mars. I will tell you more next time if you're interested.
Posted by Crow at 8:43 PM