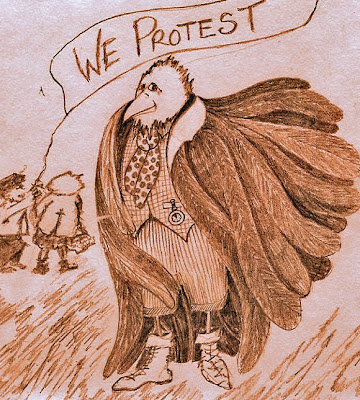 Crow here. If you're feeling frustrated and angry about things you're unable to change no matter how you vote the good news is you're not alone. Since the Atlantic Ocean is just down the street from my new roost I be-winged myself and took a quick trip to Europe and I'm here to report that similar frustrations are being acted on elsewhere. Government austerity measures that are going into effect across the continent have brought people into the streets by the thousands in Greece, France, Germany, Ireland and England.

Although these protests can't be described as having achieved success the important thing is that they haven't gone unnoticed. All of them were originally caused by the huge fraud that was perpetrated on the world by the banking system. The fight we are up against in the world today is the psychopathic misconception that profit and control are the supreme goals of all powerful nations.

The homogenized vision propagated by much of the world's financial/political leadership is actually contra-survival. Health for mankind and those of us who share the planet with you has always been better when there are many culturally varied, independently sustainable and ecologically sound economies. I don't advise long distance travel for a protest on Wall St. but non-cooperation isn't a bad idea and it's one that can be undertaken by many at once if planned on the internet. For example 'Buy Nothing Day' is the Friday after Thanksgiving. If you haven't celebrated it in other years maybe now is a good time to start. It would be good practice for the only kind of protest the uber-rich do understand and if all you've got is chicken feed, why not share it with the birds?

Spend your time being kind to one another as if you live in the early days of a better world. That's what the rest of us do every day.