I think we all have intense internal relationships with the wild world that signify our need for a counterbalance to the mindless destruction our technology has wrought on the planet.

The manipulation of money supply through the ages to finance war and thus technological supremacy is coming up against the wall of resource scarcity. The oceans are dying, bio-diversity is being stamped out, and anthropological diversity is being decimated. It's really unfortunate that money doesn't grow on trees. If it did, we'd have better control over it for we would have to nurture it and cultivate it and then distribute only what was harvested. Just imagine what Wall St. would look like.

Politicians exist to preserve existing systems, not change them. The political system itself is both cumbersome and anachronistic in a period of history when decisions could be made on important issues simply by entering objective data into computers. Unfortunately, the majority of people respond to simplistic concerns which only tend to repeat the cycle. The idea that you could sit and talk to individuals in order to alter their opinions is pretty hopeless when the first thing they'll do when faced with difficult circumstances is to find someone to blame. 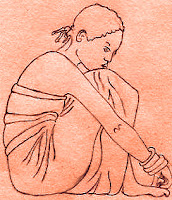 I've been feeling bad this past week not to have been able to discuss the current political situation directly with my friends and former co-workers in the US. Even though I don't believe I can change anyone's mind, I still believe I can help to change hearts at little.

Anyhow, I've been working to block out the design for a new painting. Here's the not quite finished line drawing of the main character. Tell me what you think.
Posted by susan at 1:26 PM