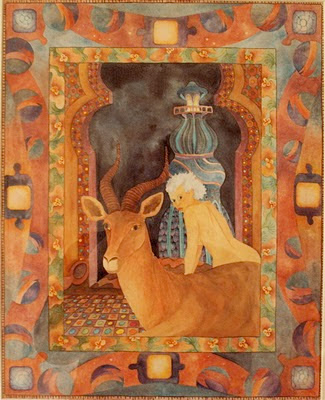 Here's yet another from the collection in case you've never seen it. It's under glass so I didn't get the best image but I'm sure you'll get the idea.

It keeps on getting colder here though we have balcony rails now so it's not a straight seven floor drop over the edge. The grinding has been a constant for two months but those boys look cold too and some days, when the wind catches the scaffolds, I'd swear they were rehearsing for the circus. Maybe they're trapeze artists once building season ends. It couldn't be that they stay home and drink huge amounts of beer, could it?

The good news is our car is now a genuine Canadian with her Nova Scotia plates, a safety sticker and a $200 addition to her electronics that turns her lights on when she starts. Apparently it's a law here that must have been lobbied into being by the automobile lightbulb association. When we went to the provincial version of the DMV to get everything taken care of we were prepared to spend the day - sandwiches, drinks, books, and games all in hand - yet were amazed that our licenses and the registration was all done in less than an hour.

Another weird thing has been the complete absence of Halloween and Christmas decorations, advertisements, store, and mall displays. Both holidays are celebrated here but it appears the total commercialization I've grown immured to never happened. It's quite refreshing.

Just for a little entertainment, maybe you'd like to see something neat that came as a surprise to me, although I'm sure my Canadian friends know all about this projection production that's been a regular event in Quebec City since 2008. 'The Image Mill' was created as part of the celebration of the city's 400 year history and the screen is an old grain mill on the harbor. 2000 feet long and 100 feet tall, the historical images and films projected on the huge old cylinders look pretty cool. I've only been there once but I remember Quebec as one of the most beautiful cities I've ever seen. Now I have another reason to go back for a visit.. unless they decide to do one in Halifax.

I'm always up for a little projection..
but thank heavens for radiant
heating.