hold on, it's coming 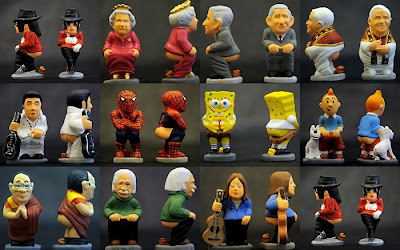 With Thanksgiving upon us and Christmas coming sooner than we like, I thought I'd share an amusing Catalonian tradition I just learned about. Since the 17th century during Christmas, a large model of the city of Bethlehem is created along with the usual nativity scene. Tucked away in a corner of the model there has always been a little figure of a defecating Catalan peasant, called the Caganer.

It's considered to be a good omen and a sign of the earth being fertilized. In recent years, instead of a peasant wearing a red hat squatting in a corner, modern Caganers are caricatures of famous people.

It could be said Caganers represent the equality of all people and I rather like that definition. Then again, it could mean other things too which I'll leave for you to decide.
Posted by susan at 12:56 PM