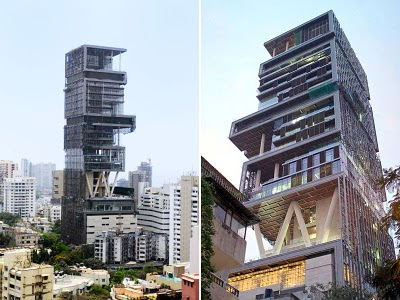 I was wondering what it might be that the uber-rich like to spend their ill-gotten gains purchasing. I know about yachts, mansions, fancy cars, fabulous jewels, antiques, famous paintings, and other trinkets but the strangest thing I found was this - the world's most expensive house. 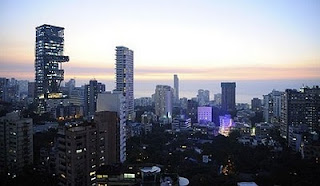 I was so unnerved by it I had to post this extra picture so you could see it against the skyline. It's a recently completed building in Mumbai, India and is home to India's richest man, Mukesh Ambani. The house, which cost more than $1billion, is 27 stories tall but at 568 ft would be a 60 storey building if it had normal ceilings. It has 398,000 sq ft of living space that requires a staff of more than 600 people to care for him, his wife, and three children. Mukesh Ambani wasn't from Dharavi but his father, who made the original fortune, came from very modest means. It's sad to see such a bizarre example of conspicuous consumption in a country that's one of the poorest on the planet. 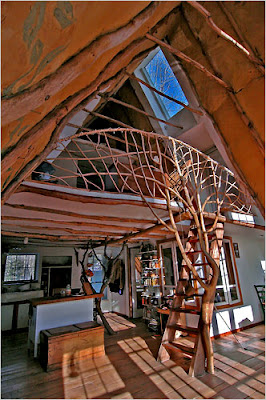 Speaking of spending money wisely for housing, I came across an article from last autumn's NY Times about a Wisconsin forester-architect who uses small, whole trees to build houses, greenhouses and larger buildings. The economic slowdown has put several contracts he'd anticipated from non-profit companies on hold but not so strangely, a lot of people have been asking him for small houses. At $100 per square foot, imagine how many nice little houses Mr Ambani could have built for the price of his personal skyscraper? I'm sure there would have been enough for homes for his 600 staff members who likely do live in Dharavi.


Yes, wealthy people do what they like with their money but the fact is that they mistake the true wealth of the world in their calculations. In today's culture of profit, we don't produce goods based on human need. We don't build houses based on population needs. We don't grow food to feed people. Instead, we're decimating our renewable natural resources to rip non-renewables out of the ground.

There are many clever and talented people in the world like the forester-architect and lots of room for other ways of doing things. I don't know what will happen in the future but it makes me feel better about today knowing he and others like him are here.
Posted by susan at 2:10 PM